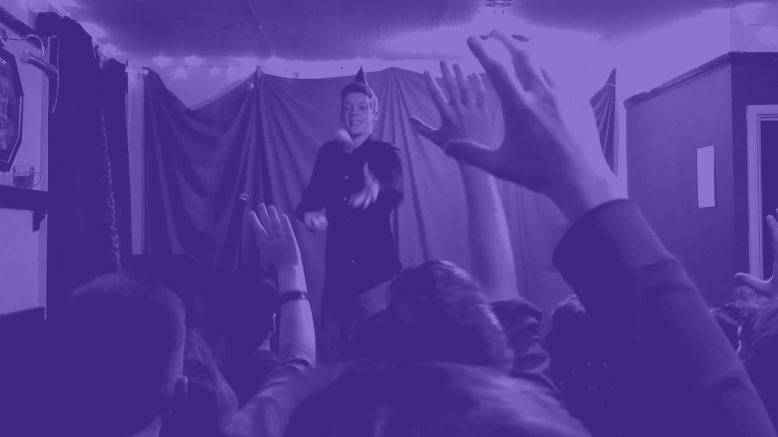 The Sheffield Revue is a comedy society based in the University of Sheffield. We’re a group of enthusiasts and fans of all sorts of comedy. Writing, directing, and performing in almost every medium you can think of. As well travelling around South Yorkshire watching as much comedy as feasibly possible.

Ever wanted to try stand-up? Aspiring comedy writer? Want to work on developing performance skills? Interested in the logistics of directing & producing comedy? Just want to try comedy but don’t know where to start?  Here at The Sheffield Revue you’ll be at home with a group of like-minded, friendly and enthusiastic people, and you’ll be able to explore and develop your comedic voice in a relaxed and creative environment.

We at the Revue pride ourselves as being a society where all members get a chance to make their mark. We have no membership fees, and no paying to perform. We’re always trying out new ideas in terms of projects that we could work on or avenues we as a society could take.

What sort of things do you do?

Well, for starters we hold two main shows. Cannon Fodder is the society’s open mic night where aspiring stand ups can try out new material. Our second main show is Looking Sketchy, our regular sketch show. It’s sort of like an open mic night for sketches, where writers can have new sketches tested out and performers can get an opportunity to develop their sketch performing skills. We also run themed shows around the year, including a end of year Christmas show. The long and short of it is that we hold lots of shows throughout the year, so no matter what style of comedy you prefer, there will always be opportunities to show off your stuff.

If people want to get involved in the writing and performing of these shows, we hold regular workshops. In our Writing Workshops (Tuesdays 6-8pm) people can come in with material of all types, whether it’s stand-up material, a sketch, or something else entirely, and receive help and feedback in developing them & fleshing them out. Our Performance Workshops (Thursdays 6-8pm) are a combination of skills workshops focusing on things like staging, body language, vocalisation and more, and opportunities to perform previously written material to put those skills into practice.

We also sometimes run podcasts, radio shows and filming sessions depending on what the membership wants and needs, so if there’s a type of comedy you want to do and we don’t currently do it, let us know and we can help you set it up with us or point you in the direction of someone else who can!

That seems like a lot of stuff, do you at any point just chill & relax or something?

The social aspect of the Revue is something we care a lot about and are very proud of. A warm and friendly community isn’t just marketing speak we put on a flyer, it’s true. We hold a wide variety of socials throughout the year, from  film nights to Christmas dinners, from bar crawls to pub quizzes. And of course on top of that we also head out to see comedy gigs in Sheffield and beyond. In the past few years alone we’ve gone to see acts like Stewart Lee, Isy Suttie, Josie Long, Robin Ince, Bridget Christie, Eddie Izzard, and so many more. The society has contacts with all sorts of comedy nights & bookers around the city, and we try to immerse ourselves in Sheffield’s rich and unique comedy scene.

Sounds great. How do I get involved?

You can follow us on our many social media platforms to keep track on shows to see, videos to watch, podcasts to listen to, and words to stare at. If you want to write and perform with us then feel free to turn up to our weekly workshops (Tuesdays and Thursdays, 6-8pm, View Room 4)  and get to know our lovely selves. And if you have any other enquiries, questions, or threats then feel free to email us at sucre@sheffield.ac.uk. Or, I don’t know, fax us or something.